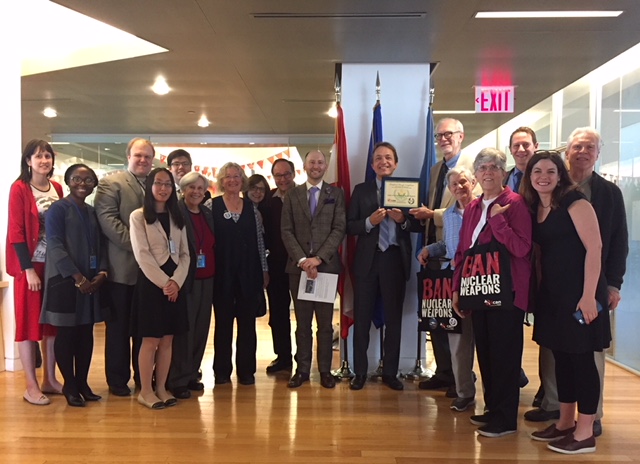 The Treaty Awareness Campaign is a 501(c)(3) non-profit organization committed to the total elimination of nuclear weapons.

On 7/7/17, the Treaty on the Prohibition of Nuclear Weapons (Nuclear Ban Treaty) was agreed at the United Nations by 122 countries, and on 1/22/21 it entered into force.  It’s the game-changer we’ve been waiting for!

Our sister organization, NuclearBan.US, is a 501(c)(4) nonprofit that works to build POLITICAL SUPPORT for the Treaty in the US. They’re supporting city, state, and national legislation to shift funding from nuclear weapons of mass extinction to green technologies and other pressing human needs.

We share a goal: for the US and the other 8 nuclear-armed nations to sign and ratify the Nuclear Ban Treaty and work together to dismantle every single bomb. 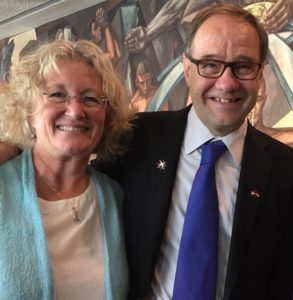 When Vicki Elson became a mom in 1981, she became acutely concerned about protecting her beautiful children from nuclear wars and nuclear accidents.  She thought she was neurotic, and she told herself to stop worrying so much.  She spent 35 years raising her kids and grandkids and making herself happy by working as a childbirth educator, filmmaker, and labor support “doula.”  But after Fukushima she started worrying again, and she realized that she’s not neurotic at all — it’s a crazy world where the profits of a few put the entire planet in unspeakable danger.

In July 2017, she had a life-changing opportunity to witness the U.N. negotiations for the Treaty on the Prohibition of Nuclear Weapons, and she watched the roomful of ambassadors break all their own rules (no clapping, no hugging) when the Treaty was agreed.  Now she makes herself happy by doing something constructive about nuclear weapons: helping citizens take action toward total abolition.  She thinks that’s an even more important way to help babies and families to live happy, healthy lives.  She also writes little songs to inspire citizen action.

Timmon Milne Wallis holds a PhD in Peace Studies from Bradford University.  He is currently the director of the Quaker Council on European Affairs. He has served as executive director of Nonviolent Peaceforce, and he has directed peace-building projects in Colombia, Guatemala, Mexico, Northern Ireland, Kosovo, Georgia, Myanmar, Chechnya, Croatia, Sri Lanka, Philippines, and South Sudan.

His book, Disarming the Nuclear Argument: The Truth About Nuclear Weapons, analyzes the cost, accident risk, and legality of nuclear weapons, and the absurdity of the whole concept of perpetuating nuclear weapons as “deterrence.”  The book played a role in the successful July 2017 United Nations negotiations for a Nuclear Ban Treaty, and it is a handbook for those seeking a safer, saner world.